A Look Back at the Tylenol Crisis 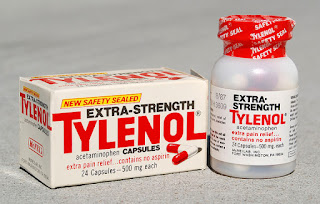 Early morning, on this day, 39 years ago, 12-year Mary Kellerman, from a Chicago suburb, complained of a sore throat and runny nose. Her parents gave her one extra-strength Tylenol capsule.

That same day, 29 September 1982, a 27-year-old postal worker named Adam Janus of Arlington Heights, Illinois, died of what was initially thought to be a massive heart attack. His brother and sister-in-law, Stanley, 25, and Theresa, 19, of Lisle, Illinois, rushed to his home to see and console the gathering of family and friends.

They both experienced throbbing headaches, not an uncommon response to a sudden death in the family, and they took a Tylenol extra-strength capsule each. It was from the same bottle Adam had taken a little earlier in the day.

Also, on the same day, in a nearby place, Mary Reiner had had a headache after giving birth to a baby. She was given a capsule to lessen her pain. It was a Tylenol extra-strength capsule. She died too, on the same day.

Seven people died in four days, in the same city after consuming the same capsules.

Actually, it was not until a couple of days later that the investigators found the shocking connection between the deaths and the capsules taken by the victims.  More importantly, the investigators quickly called them “murders”.

These were not accidental deaths by spurious medications. These were deaths caused by someone who laced the capsules with the lethal Potassium Cyanide! It was a deliberate deadly contamination by someone completely devious and demented.

Now, as we remember, on this day, that nationwide panic in the USA, we should also remember the great lessons learnt by the corporate world, on the handling of the media amidst this huge crisis; a crisis that became known as the Tylenol Crisis, and as a business management case study in universities.

We must appreciate how Johnson and Johnson recalled some 31 million Tylenol products from all grocery stores and pharmacies around the world, and destroyed them; a total worth of $100 million which, forty years ago, was a lot of money.

Some may say that Johnson and Johnson went overboard. But there are many others who say that the company took the right response. It even changed the way medications are packed.

According to pbs.org, “Before the 1982 crisis, Tylenol controlled more than 35 percent of the over-the-counter pain reliever market; only a few weeks after the murders, that number plummeted to less than 8 percent. “The dire situation, both in terms of human life and business, made it imperative that the Johnson & Johnson executives respond swiftly and authoritatively”. And respond they did, and swift it was.

This classic corporate communications example used in business schools around the world gives us a valued lesson on how companies must hold on to their values.

Alan Hilburg, the US-based communications and branding consultant, was the guru who crafted the then extremely innovative response to the Tylenol Crisis.

He says in a recent article online that “Crisis management is not about public relations driven ‘damage control’. It’s about business continuity. About affirmative strategic, business-centric actions with a strong focus on the victims in a crisis”.

Unless organizations respond quickly, honestly and decisively to its customers and stakeholders, especially the aggrieved ones, they won’t be seen as those that can build – or as in the case of Johnson and Johnson - rebuild trust and loyalty.

These days, with the high speed of social media communication, and the growing popularity of customer reviews, customers’ needs can be easily understood, and based on that customer experience can be enhanced.

It is of course easier said than done. But, it can be done.

Posted by Joel Indrupati at 10:04 AM No comments:

These articles appear in print editions, on Wednesdays